A Week at Waterloo

I’ve just visited the excellent exhibition on Waterloo and its consequences – including literary ones – at Cambridge University Library: ‘A damned serious business: Waterloo 1815, the battle and its books’. It is thoroughly to be recommended – well laid out, lots of information in the labelling, and legible (something not to be taken for granted in many displays these days, and that’s not just my failing eyesight talking).

One of the most interesting aspects was the afterlife of the site of Waterloo as a tourist attraction: the earliest visitors reported seeing bloodstains on the walls of Hougoumont farmhouse, and human limbs still protruding from the ground; later, famous sightseers included Dorothy and William Wordsworth, Sir Walter Scott (perhaps researching for his life of Buonaparte?) and King George IV himself. Cynical commentators noted how the locals seemed to be thriving as ‘eye-witnesses’ and providers of souvenirs from the battlefield, including shot, and uniform badges and buttons. 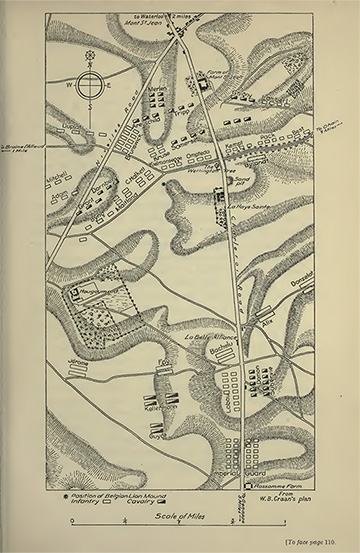 This plan from the book shows the field of Waterloo, with the farmhouse at Mont-St-Jean, where William died, at the top.

In my previous existence, we produced a number of ‘Waterloo’ titles, of which a list can be found here. One I was disappointed not to have ‘done’ was Narrative of a Residence in Belgium during the Campaign of 1815: and of a Visit to the Field of Waterloo, published by John Murray in 1817. Charlotte Anne Eaton (1788–1859) fiction and travel writer, visited the site shortly after the battle: she had been travelling in the Low Countries, and was hastily evacuated to Antwerp from Brussels in the days before the battle, when it seemed all too likely that Napoleon would win, and Jos Sedley was busy getting his ‘military’ mustachios shaved off. 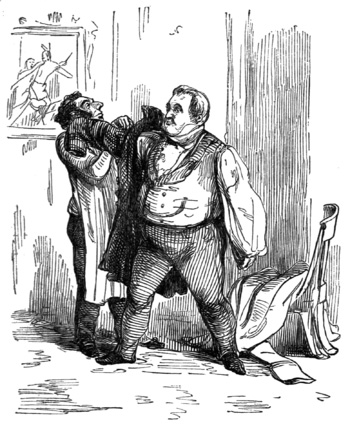 The unheroic Jos preparing to flee Brussels: Thackeray’s own drawing for the first edition of Vanity Fair.

But an even more immediate and striking account of the aftermath is given in a title new to me: A Week at Waterloo in 1815, by Magdalene De Lancey. She was the new bride (married on 4 April 1815) of Sir William Howe De Lancey (1778–1815), a career soldier who was one of Wellington’s close circle, and was appointed quarter-master general of the army for the Low Countries campaign. (He replaced Sir Hudson Lowe, who seems to have been as unpopular with Wellington as he was later, as governor of St Helena, with Napoleon.) 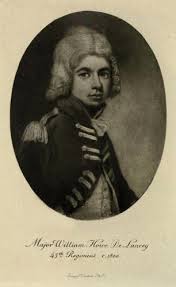 Sir William De Lancey. c. 1800, the frontispiece of the book.

Magdalene wrote a detailed and heart-rending account of her husband’s death on 26 June, from wounds received in the battle, for her brother, the writer Basil Hall. He showed it to Tom Moore, Sir Walter Scott and Charles Dickens (who was deeply moved by it, as is shown by a letter of his in the appendix), among others. However, it was not published until 1906, when it was edited by Major B.R. Ward of the Royal Engineers. (Magdalene also wrote a shorter, less personal account discovered later in family papers: sections of this are given in the accompanying notes, as are quotations from Charlotte Eaton’s narrative.) 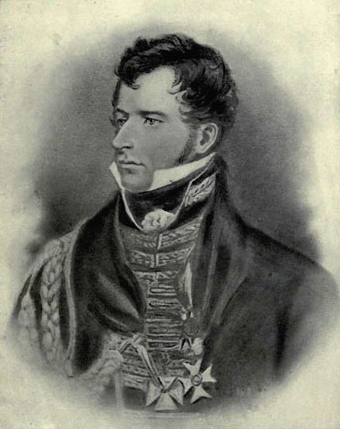 William in 1813: this image is possibly from a sketch by Magdalene.

Genealogical material about the De Lancey family in the introduction reveals that Sir William was descended from Etienne de Lancey, a Huguenot from Caen, who travelled from France to Holland after the revocation of the Edict of Nantes, then to Britain, and then – as a British subject – emigrated to America. He arrived in New York in 1686, and prospered mightily: Delancey Street, in the Lower East Side, remembers the family, and in 1906, the 1700 De Lancey House was the oldest surviving building in New York City. (It seems not to exist any more.)

During the War of Independence, the family became divided: of three sons, the third, Oliver, remained a Loyalist, raising three regiments for the Crown, and was later attainted by the new republic and had his estates confiscated. He left for Britain, and died in Beverley, Yorkshire. His son, born in New York, became a British colonial administrator, but died in Portsmouth, New Hampshire, in 1798, having been taken ill on a voyage home from the West Indies. It was his son William (also probably born in New York) who joined the army, met Wellington in India, and became his close friend and colleague, serving with him in the Peninsula campaign, and responding to his appeal to join him in the Netherlands weeks after his wedding.

Magdalene, from a miniature by George Engleheart (image from the book). It is not clear if the original has survived, though a miniature of William by the same artist has.

Magdalene went too. She settled down in a house in Brussels a few doors from the duke of Wellington: ‘such a scene of happiness, so perfect, so unalloyed!’ Her husband sent her to Antwerp for safety on the eve of the battle: ‘it added so little to the time of hearing from him, if separated, that I acquiesced cheerfully’. There followed a nightmare: William was blown from his horse by a spent cannonball while talking to the duke on 18 June, and left for dead in a complicated sequence of battlefield confusion, while Magdalene was first told that he was not dead, then that he was, and then that he was alive, but seriously wounded. (So many men in the duke’s immediate circle were killed or wounded (the earl of Uxbridge and his leg spring to mind) that he wrote: ‘The finger of Providence was upon me, and I escaped unhurt.’) 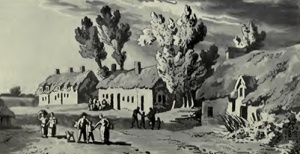 The farm at Mont-St-Jean where William died (from the book).

She rushed to nurse him at a farmhouse to which he had been carried, and over the next eight days, she watched him die. One of the useful sources cited in the introduction is a report by the surgeon: ‘He had opened the body; eight ribs were forced from the spine, one totally broke to pieces, and part of it in the lungs.’ In his official dispatches, Wellington wrote: ‘This officer is a serious loss to His Majesty’s service, and to me at this moment’, and in a more personal letter, he commented, ‘Poor fellow! We knew each other ever since we were boys. But I had no time to be sorry. I went on with the army, and never saw him again.’

Sir William told his wife that on this visit (she was out of the house), the duke ‘told him that he wishes never to see another battle; this had been so shocking. It had been too much to see such brave men, so equally matched, cutting each other to pieces as they did.’ William also said that his wound ‘might be the most fortunate event that could have happened for us both … even if I recover completely, I should never think of serving again. Nobody could ask such a thing, and we should settle down quietly at home for the rest of our lives.’

The doctors were not hopeful, and as their confidence in Magdalene’s strength of mind grew, they made this clear to her, and left it to her to tell her husband that he had days at most to live. She carried out treatments as advised by the doctors, one of whom wisely said that although it would not do any good, it would not do any harm, and he would not want her to think later that there was anything left undone which might have helped. But inflammation in the wounded lung was increasing, and ‘I sat down to watch the melancholy progress of the water in his chest, which I saw would soon be fatal.’

On 4 July, eight days after the funeral, Magdalene visited her husband’s grave, which the local gravedigger promised to plant with roses. ‘At eleven o’clock that same day, I set out for England. That day, three months before, I was married.’ And as if this was not all sad enough, Magdalene herself died in childbirth only seven years later, having remarried (another soldier) in 1819.

Like Loading...
This entry was posted in Uncategorized and tagged De Lancey, Waterloo, Wellington. Bookmark the permalink.

6 Responses to A Week at Waterloo