This all started when I was looking for frogs in art (another story…). A search engine, clearly unable to tell its Batrachia from its Bufones, came up with the three-legged toad of Liu-Hai, of which, as it happens, there are two beautiful examples – a statue carved from amethyst, and another from jade – in the Fitzwilliam Museum. Needless to say, the reasons why Liu-Hai stands on a three-legged toad are complicated …

Two statues of Liu Hai and his toad, in amethyst (above) and jade (below).

If I understand it correctly, Liu Hai (aka Liu Haichan, chan being the Chinese for ‘toad’), might have been a real person of around the end of the first millennium CE, who, having done well in the imperial examination system, rose to a rank approximately equivalent to that of prime minister, and was also famous as an (al)chemist.

Zongli Quan, the Immortal, on a silk hanging of the Ming Dynasty. (Credit: Cleveland Museum of Art)

However, he had a Damascene moment when the Immortal Zongli Quan, disguised as a Daoist monk, asked him for ten eggs and ten pieces of gold cash (which would have had holes pierced through the middle), and started stacking them alternately. ‘That’s very dangerous!’ exclaimed Liu Hai. ‘So is being prime minister’, replied the monk, snatching the cash and vanishing as Liu Hai contemplated the mess of smashed egg.

This awakened Liu Hai to Daoism: he gave up his position and wealth, and became a wandering sage, practising self-cultivation in the mountains until he became an immortal, or transcendent being, himself. There is a host of apparently factual writings and folklore about Liu Hai, and if all of it were true, he must have lived until the age of about 270. Here he is demonstrating calligraphy:

The three-legged toad not only brings wealth, but is also attracted to gold, so that if the toad runs away, it can be lured back by a sort of fishing line strung with 5 gold pieces as bait. 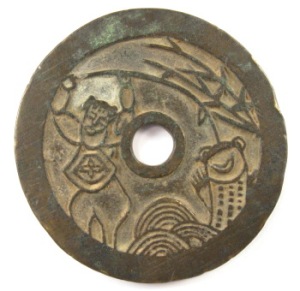 Liu Hai is also depicted as a young boy, as in this Chinese good-luck token.

The toad also has the virtue that if Liu Hai stands on its back, it can carry him anywhere. The reason for the toad being three-legged is that it represents the moon (while a three-legged raven or crow represents the sun). The toad is the moon goddess Chang’e, who drank the elixir of life intended for her husband and fled to the moon (there are other versions of this plot), where she was either turned into or swallowed by a three-legged toad. (Is there a connection to the triskelion symbols of Sicily, the Isle of Man, and elsewhere in early Europe?) 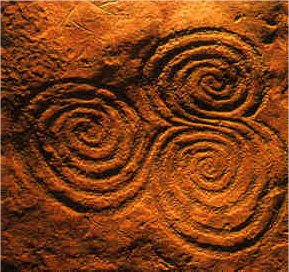 The famous triple spiral engraving from the Newgrange passage tomb in Ireland.

A silver coin from Syracuse, with the triskelion and Gorgon head. 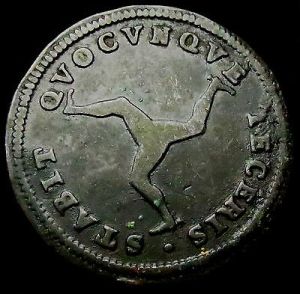 Eating the toad can confer immortality, and it is undoubtedly the case that the slime or venom of the Asiatic toad (Bufo gargarizans) contains bufotoxin, a hallucinogen used in Chinese medicine as a heart tonic and anaesthetic. There is one tale which says that, during the night, the three-legged toad produces a pearl that can either restore a corpse to life or make a living human an Immortal: and this is the point at which the Eastern and Western traditions come close to touching each other.

Toadstones (or bufonites) were believed in European folklore to come from the heads of toads, and to be a remedy against poison. (There was a similar belief about frogstones or batrachites, but toadstones were more common.)

Toadstones do not grow in the heads of toads, but in the mouths of fishes of the species Lepidotes (named in 1832 by Louis Agassiz), which is sadly now extinct. 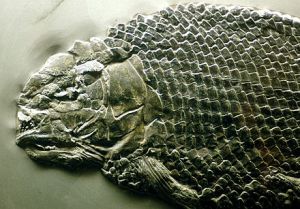 The Lepidotes family had two types of teeth: sharp biting ones on the edge of the jaw, and smooth rounded ones on the inside, for grinding whatever had been bitten (including, apparently, shellfish).  This image shows a fossilised array of teeth in the jaw.

Jaw fragment, discovered in the Charente region of France.

They come in a variety of colours, mostly black or dark brown, though some are pale and pearl-like. 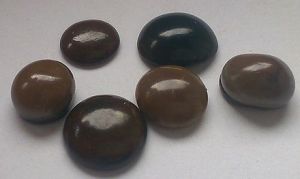 The fish were widely distributed, and casual fossil finds must have been frequent enough for the tooth itself to become fairly widely known, though how the association with the toad developed is rather less clear. That it was a commonplace is made clear by Shakespeare, who has Duke Senior say (AYLI Act 2, Scene 1): ‘Sweet are the uses of adversity, / Which, like the toad, ugly and venomous, / Wears yet a precious jewel in his head.’

First catch your toad and extract the stones; then apply them to the poison victim. (Sixteenth-century French woodcut.)

In this print, a man wrestles the (over-large) toad to get the stone; there is also the more humane advice that the toad will spit it out if you put him on a red cloth, but you must grab it quickly before it swallows it again. (This method was tested in 1609 by the physician Anselmus de Boodt of Bruges, who reported that it didn’t work.)

The toadstones’ efficacy as medicine must come from the belief (affirmed by the Elder Pliny) that ’it has pleased Nature that there should be nothing without its antidote’. Because the slime or ‘venom’ of the toad is poisonous, the toad must carry an antidote in its own body. Touching the bite of a venomous animal with the stone is enough to heal it, and internal ‘poisons’ of all kinds can be cured by swallowing it. (And, usefully, it can be retrieved, and used again in due course…) It can even, in some stories, be used to detect poison in food or drink, thus having the power of St John’s blessing (which changed poison in a chalice into a serpent).

Worldwide, other apotropaics against poison include spoons made from hornbill beaks, cups carved from agate, rock crystal or jade, fossil sharks’ teeth (‘dragon tongues’), ammonites (‘snakes’ tongues’) and gemstones including emerald and amethyst (which takes us back to the statues of Liu Hai).

Toadstones were treated like precious stones by jewellers, and were especially set in rings, deliberately made with an open setting, so that the miraculous stone actually touched the skin. The V&A has some examples, including one with ‘Whom I kiss hir I cure’ inscribed on the hoop; the Ashmolean has four, described as ‘magic rings’; and the wonderful collection known as the Cheapside Hoard includes several toadstones, presumably ready for use in rings or other jewels with amuletic properties. Elizabeth I apparently owned one, and Sir Walter Scott‘s mother had one which was frequently lent out, as it protected new-born children and their mothers from the fairies – a remarkable survival of belief in the protecting power of a misunderstood Jurassic tooth.