I occasionally potter up and down Ludgate Hill, usually in the context of an event at the St Bride’s Foundation, and never without thinking of that wonderful stanza, ‘The timid, inoffensive tapir / Is never in the morning paper. / He might be there, if he would dare / On Ludgate Hill to cut a caper.’ But I had never noticed the church of St Martin within Ludgate until a few days ago, when I was actually going there, for a really interesting day on ‘The “know” in knowledge’.

This is partly because it is embedded in a long row of buildings, some ancient, mostly modern, which front the pavement in a continuous stretch, and on that side of the road you are ‘under’ the structure, and unlikely to see how tall it is. 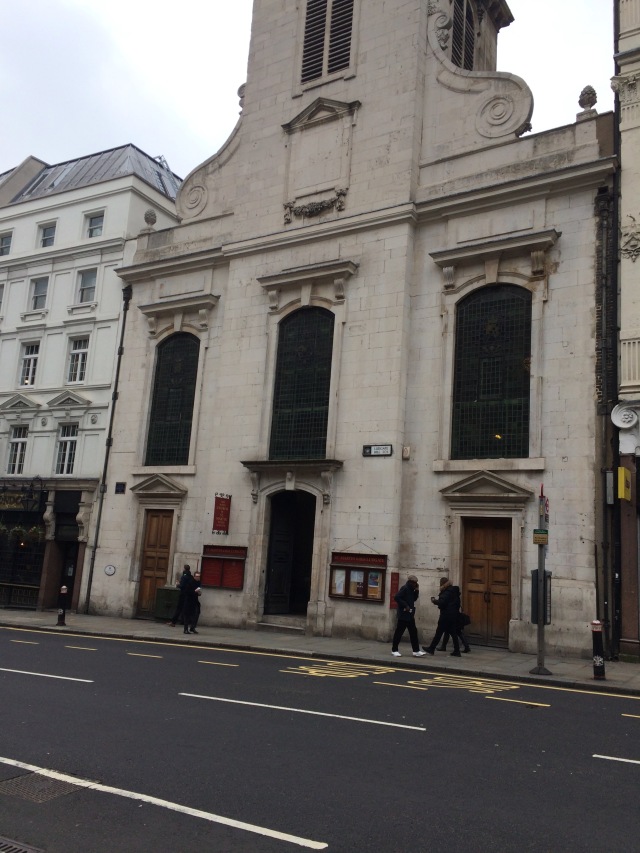 The façade at street level …

You need to be on the other side of the road to see the slender and elegant spire, which can be spotted in the distance as you descend from St Paul’s.

But there is really not much excuse for missing the noticeboard, though it turns out that this is itself deceptive …

However, having located the entrance and side-stepped the ravening hordes of office workers, heads in their mobile phones, lurching towards their City lairs, I found myself in a most beautiful space. The Greek-cross shape is quite unusual for a church in England (hugely more common in the Middle East and in Ethiopia), and made me think of Sta Maria Formosa in Venice (though on a smaller scale and much more consistently neo-classical).

Despite the noticeboard pictured above, the church is now believed by some not to be by Wren, but by Robert Hooke (1635–1703), another polymath founder of the Royal Society, who was until recently best remembered for his public spats with contemporaries such as Newton and Huygens over priority of discovery or invention – it is yet another a irony of his life that this architectural gem may well have been misattributed to a rival.

The view up Ludgate Hill in 1830, with the spire of St Martin’s prominent against the dome of St Paul’s. Engraved by Thomas Barber from a drawing by Thomas Hosmer Shepherd (1792–1864).

Apparently, in the church crypt it is possible to see that the brick walls of the original building, founded in 1174, actually rest on Roman foundations – it looks as though the church literally sat on the wall of Roman London, as well as being just inside Ludgate, the westernmost gate of the medieval city (which was itself demolished in 1760).

Ludgate, engraved by Wenceslaus Hollar about 1685. The church (in the process of rebuilding) must have been immediately behind it on the left.

The medieval St Martin’s was rebuilt in 1437, but destroyed, along with so many other City churches, in the Great Fire of 1666. The new church was begun in the 1680s, but not completed until 1703.

Saint Martin divides his cloak outside the cathedral of Lucca.

The church’s position on the very edge of the historic city may explain its dedication to St Martin of Tours, who divided his cloak with a beggar and is one of the patrons of travellers (as well as beggars, innkeepers, wine-makers, reformed alcoholics and geese); in London and Cambridge, churches dedicated to St Botolph are similarly located.

The interior is full of interest. There’s the double wicker-seated chair for the churchwardens (1690, and unique, apparently), the font with a Greek palindrome,

The sixteenth-century font. The palindromic Greek sentence means ‘Cleanse my sins, not only my face.’

The label reads: ‘ One of the bells of St Martin’s, the Gift of William Warne, Scrivener to the Parish of St Martin’s Ludgate, 1683’.

the original reredos above the altar: 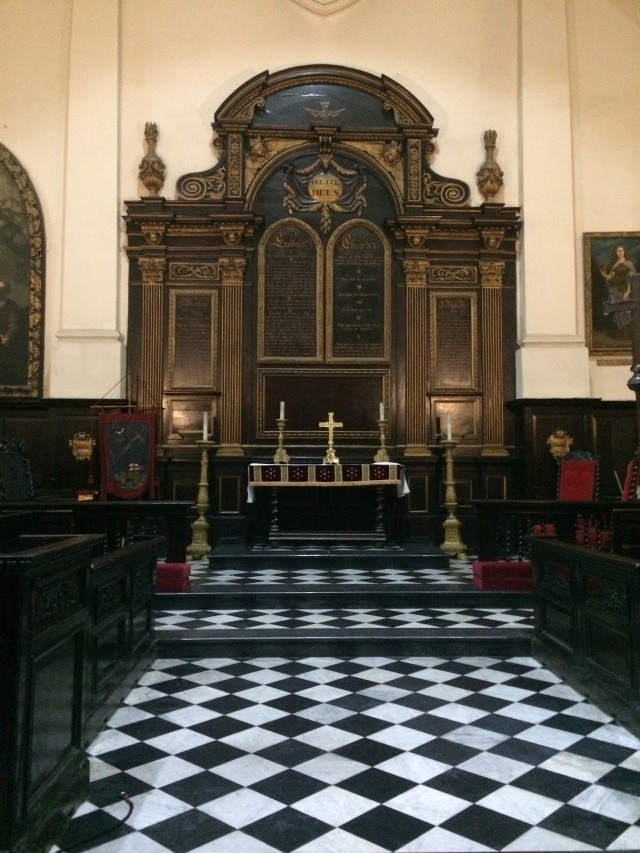 The reredos, with the Lord’s Prayer, Ten Commandments, and Creed. The elaborate wood-carving throughout the church includes Grinling Gibbons’ ‘signature’ open peapod, but was in fact carried out by one William Emmett.

the huge brass chandelier of 1777, originally made for the cathedral of St Vincent in the West Indies, and not least, the organ, on which we were lucky enough to hear some music by Bach (and some probably not) played by Francis O’Gorman. The original instrument was built in 1684 (the year before Bach’s birth) by Bernard Smith/Schmidt/Schmitt (‘Father Smith’, c. 1628–1708) – I had no idea that his origins were so obscure and conjectural. Some of the pipework was preserved in the rebuilding by Theodore Bates in 1848 – who lived and had his warehouse between 1824 and 1859 just down the road at 6 Ludgate Hill. Last restored in the 1950s, the organ is now in need of (expensive) TLC, but still manages to make a lovely sound.

There is a lot of information in the church about the people who worshipped there, not least the rector from 1614 to 1626, Samuel Purchas, friend and intellectual successor of Richard Hakluyt. There is a gravestone of an eighteenth-century ‘Purcas’ family in the floor, and I assume these were descendants?

The memorial slab of the Purcases, husband and wife, whose virtues the reader is urged to imitate.

The vault beneath the church was cleared out in 1893, as part of the general move to improve the sanitation of the City – one thinks of the ‘berryin ground’ in Bleak House forty years earlier. Burials were also removed from under the garden of Stationers’ Hall, which is behind the church, with which it has close and cordial relations.

The notice of the clearance of the bodies in the vault and the Stationers’ garden. (Sorry about the reflection of the stained glass shields high in the opposite wall.)

Near the beginning of Little Dorrit, Dickens lands the newly returned Arthur Clennam in a coffee house in Ludgate Hill, tormented by the dismal tolling of the Sunday bells of the nearly churches, including, presumably, St Martin’s. (However, the bells which inform you that ‘you owe me five farthings’ are probably those not of this church but of the now defunct St Martin Orgar, in Martin Lane off Cannon Street, partially destroyed in the Great Fire.)

Whether Arthur was sitting in the London Coffee House, a few doors down from the church on Ludgate Hill, frequented in the previous century by Benjamin Franklin and also by Joseph Priestley and his circle, is not clear; but it is known that James Boswell attended a service at the church on 15 May 1763, the day before his life-changing first meeting with Dr Johnson. Earlier still, on 6 June 1643, the parents of William Penn, Quaker and founder of the State of Pennsylvania, were married in the church. Two more literary connections: Coleridge was reading Purchas’ version (volume 11 of the 1625 edition) of Marco Polo‘s account of the kingdom of Kublai Khan, before writing famous fragment Kubla Khan. ‘In Xandu did Cublai Can build a stately Pallace … in the midst thereof a sumptuous house of pleasure …’ And Sir Thomas Malory was in prison in the Ludgate gatehouse (though another tradition suggests he was in Newgate) when he started writing Le Morte Darthur.

There is also the parish chest, the two enormous tables of benefactors whose donations were presumably kept in the chest,

Above and below, the two tables listing benefactors: sorry that the fascinating detail was not captured by my camera. 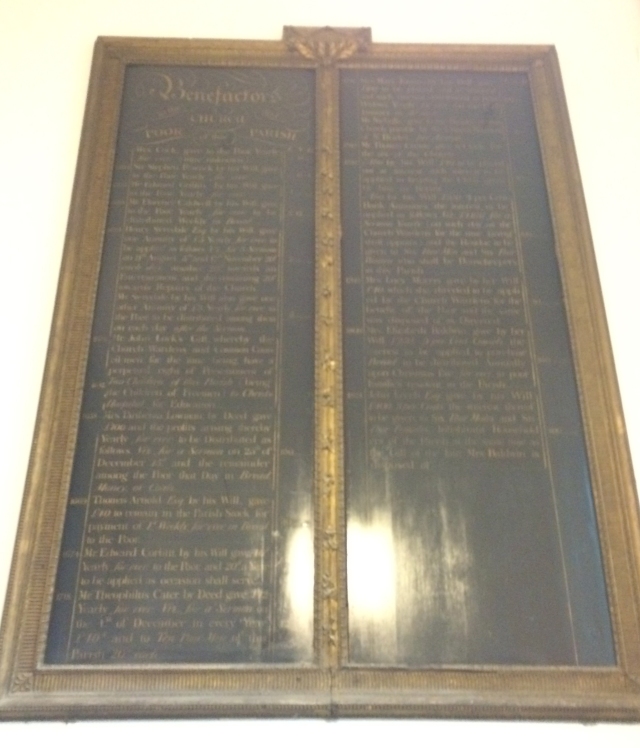 and many memorial tablets, from a tiny and almost illegible Elizabeth brass to this fascinating marble slab, visible from the stairs up to the meeting rooms built into the roof space.

No relatives, only friends, and the emphasis on ‘An Honest Man’ – was this perhaps the Christian Schindler, ‘merchant, dealer and chapman’ who was declared bankrupt (and thus could not be imprisoned for debt) as reported in the London Gazette of 29 December 1810 to 1 January 1811? 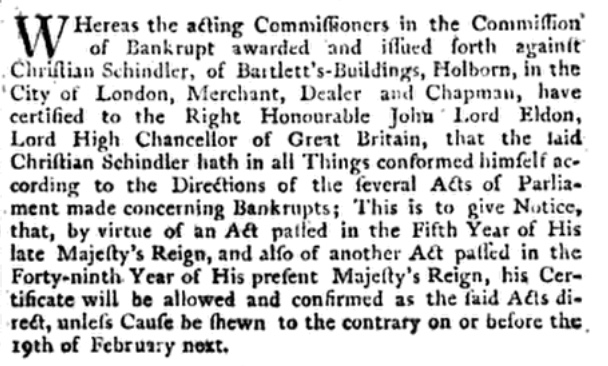 The notice of Schindler’s bankruptcy.

He is presumably one of the many removed to Brookwood Cemetery after 1893: where he is in company (among thousands of others, in what is still the largest cemetery in western Europe) with William and Evelyn de Morgan, Professor Robert Knox the anatomist, and the painter John Singer Sargent.

St Martin’s welcomes all on weekdays for ‘church-collecting’ or just a quiet place to pause and reflect – which I shall definitely do, next time I’m failing to cut a caper on Ludgate Hill.

4 Responses to St Martin within Ludgate