Also in Brugge the other day, I was hit by a interesting revelation (assuming, of course, that the statement below, in the Groeninge Museum, is true). The reason Jan van Eyck, Hans Memling and the other so-called Flemish Primitives painted jewels so beautifully and lovingly was twofold: they had plenty of examples before them, not only at the Burgundian court but also among the staggeringly rich merchant class of Flanders; and they painted in oils.

The term ‘Flemish Primitives’ sounds faintly derogative today. ‘Primitive’ came into use in the 1840s as a replacement (in painting) for the adjective ‘Gothic’, which became applied to architecture and sculpture only. ‘Primitif’ seems to have been the equivalent of ‘naïf’ or ‘pure’, as in the paintings of Fra Angelico, and the term ‘Ecole primitive flamande’ became one of the ways of referring to Northern Renaissance painting. Self-evidently, there is nothing at all primitive about it. 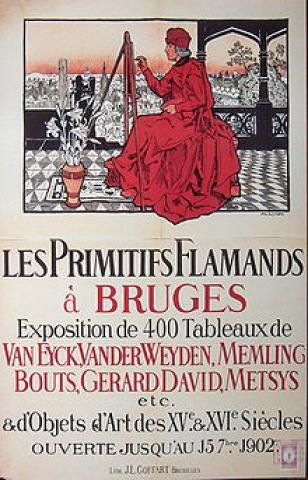 Poster for an exhibition of Flemish Primitives in Brugge, 1902.

It used to be believed that the Flemish Primitives had invented the use of oil painting – i.e. the use of linseed oil as a liquid medium in which to mixed powdered plant and mineral colours. Like almost everything in life, it’s a bit more complicated than that, but certainly Van Eyck, Memling and their contemporaries were in the forefront of adopting the technique, on wood panels and later on canvas. Indeed, Antonello da Messina, credited by Vasari with the introduction of oil paints into Italy, is alleged to have been inspired by Flemish paintings in the collection of his patron, Alfonso V of Aragon, in Naples.

It seems to me that the delight these painters took in painting jewels sometimes took them outside the conventions of depiction, especially on religious topics. In his Last Judgment, Jan Provoost (?1462–1529) has an angel clothing a risen soul not in the normal plain white robe but in one with an elaborate jewelled border, and further gems are scattered on the paving at their feet. 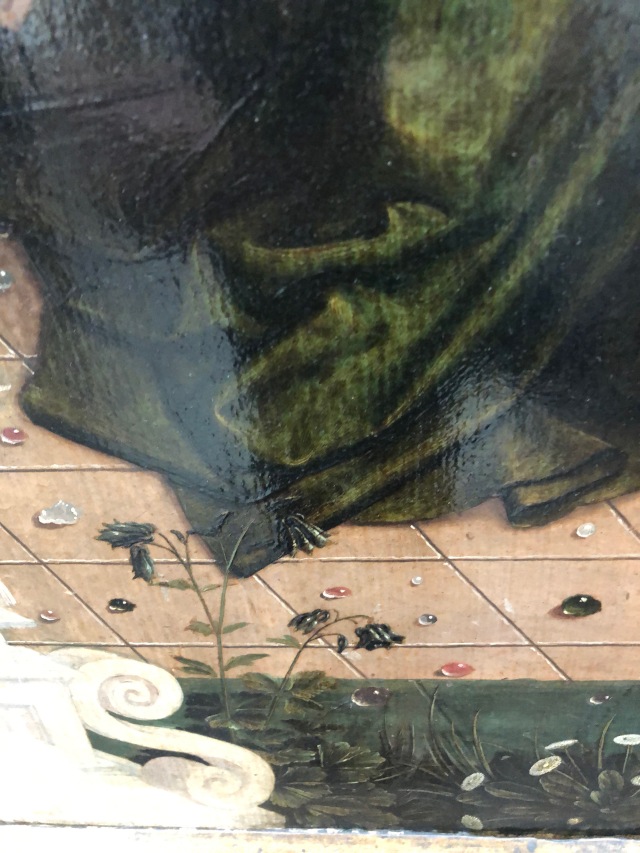 Saints and martyrs are also more bejewelled than was traditional: St Godelieve (???1052–70), married against her will (she wanted to become a nun) and strangled by her husband (hence the long scarf round her neck), has a sparkling crown and a jewel at her waist as she stands behind the donor to who she is patron. (Admittedly, St Nicholas, the other patron, outdoes her in terms of adornment, but as a bishop he was allowed.) 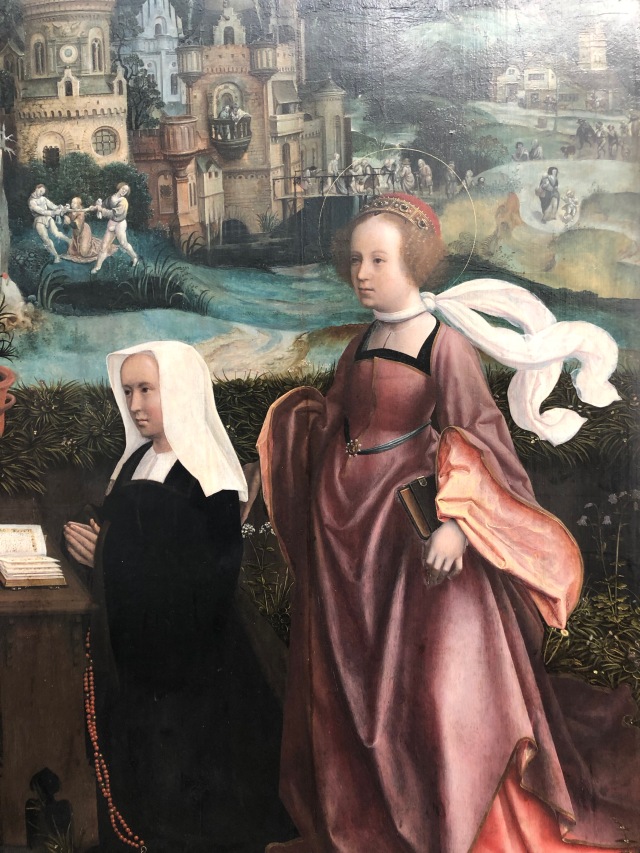 Also by Jan Provoost, St Godelieve has a jewelled crown and belt. 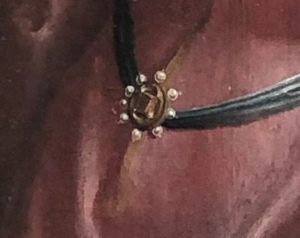 In the Jan des Trompes Triptych, by Gerard David (?1460–1523), the baptism of Christ is shown in the centre – an angel, robed as elaborately as a bishop, holds Christ’s garment. The side panels show the donors and their patron saints, John the Evangelist and Elizabeth – who again is wearing a jewelled crown and carrying another. 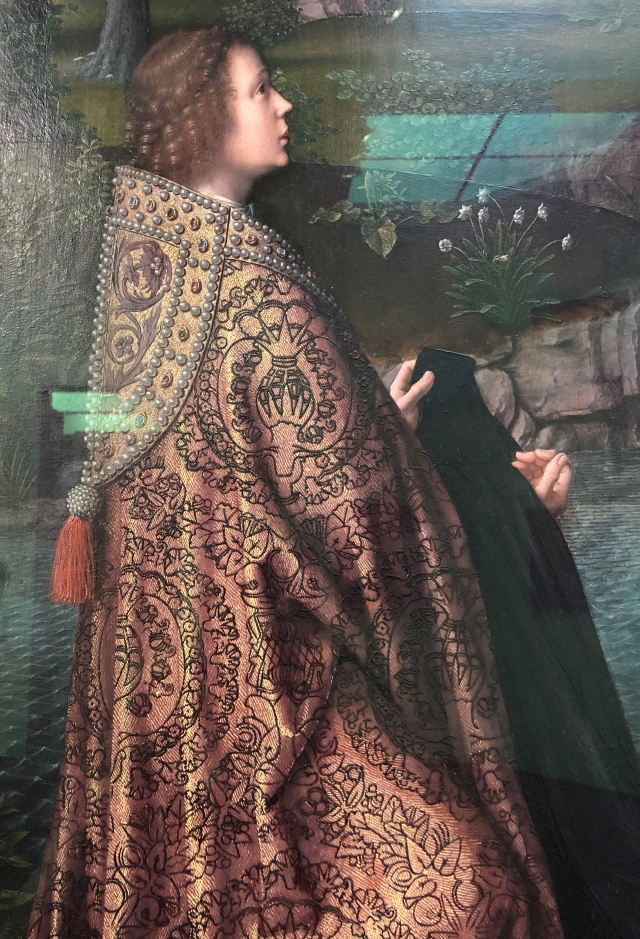 Gerard David, Baptism of Christ (detail), from the Triptych of Jan Des Trompes. (Apologies for the reflections.) 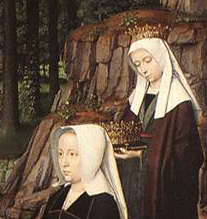 St Elizabeth and her two crowns.

One of the most famous paintings in the Groeninge Museum is Van Eyck’s The Virgin and Child with Canon van der Paele (painted around 1434–6) – note the canon’s pair of spectacles. The jewels around the edge of the Virgin’s bright red cloak are most beautifully and lovingly depicted. 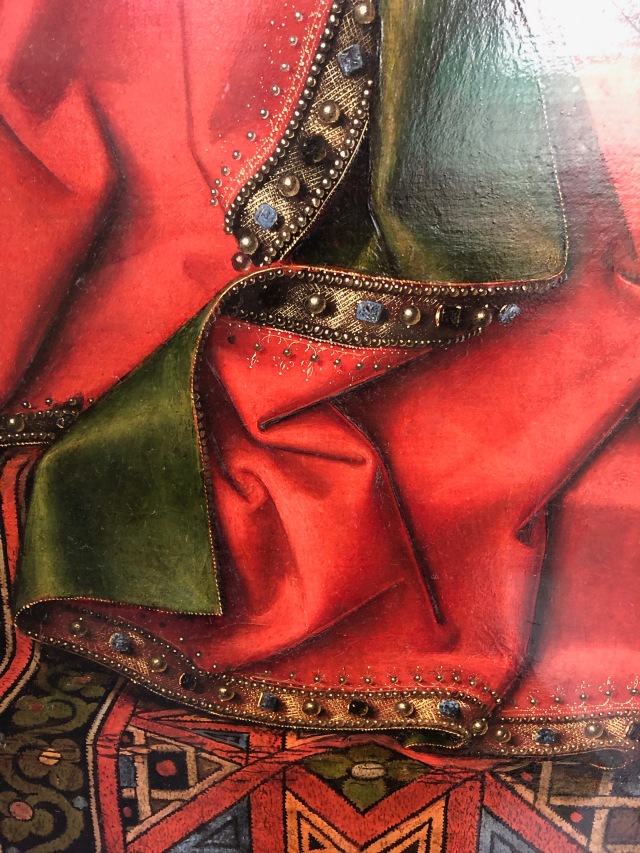 The hem of the Virgin’s cloak.

St Veronica, depicted by the Master of the Legend of St Ursula, has the elaborate jewelled headdress of the wife of a rich Brugge merchant, and St Ursula herself, by the same eponymous Master, is depicted in her glory, not just as a martyr but also as the daughter of a king (of Cornwall, allegedly).

St Veronica, by the Master of the Legend of St Ursula.

The Master of the Legend of St Lucy, active in Brugge between 1480 and 1500 (and who, by the way, painted a retable for the Brotherhood of the Black Heads in Tallinn) produced a triptych of the Lamentation with the donors and their patron saints on either side, the donor’s wife looking distinctly prosperous. On the reverse panels are St Dominic and St Francis, the latter with three jewelled mitres on the floor by his feet. 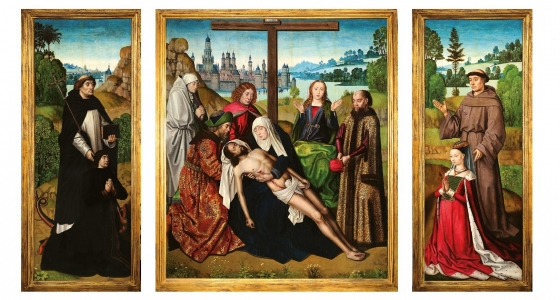 Master of the Legend of St Lucy, ‘Lamentation’, with donors. (Credit: Credit: the Groeninge Museum, Brugge)

The bright clothing and jewels of the donor’s wife make a contrast with the sober outfit of her husband.

Three jewelled mitres at the feet of St Francis.

And finally (though I could go on …), a more modest set of jewels, depicted in the portrait of a young woman by Hans Memling (?1430–94), in Sint Jan’s Hospital.

Memling, ‘Portrait of a Lady’.

Painted in 1480, she is called Sibylla Sambetha, the Persian Sibyl, but is clearly an individual and probably a native of Brugge. She is wearing seven rings (as far as can be seen), on fingers which extend beyond the frame of the picture, and a gold chain with a cross of mounted jewels (garnets?), with three pearls hanging from it.

Modest enough by comparison with some of the examples above, but painted with exactly the same care and delight in capturing the glints and highlights of the gems and pearls, using the wonderful new medium of oil.